Bath represents, I suspect, an early example of modern urban planning. By the 18th century, as increasing numbers of visitors traveled here for the waters, the city recognized the need for much more housing. Instead of haphazard development, Bath hired the architects John Wood and his son to plan the buildings and streets that make Bath so recognizable. The purest illustration of the Georgian design, the Royal Crescent, is a grandly sweeping curve of townhouses built in the yellowish limestone that dominates the city.

The  sweeping curve gets repeated frequently around the city. A block away from the Royal Crescent is the Circus, four quadrants that circle a small park dominated by huge sycamore trees. 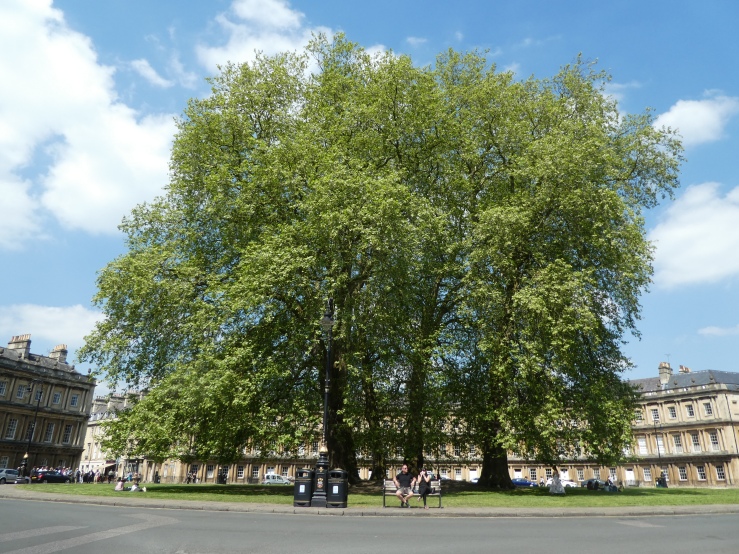 But one comes to Bath for more than wandering its streets and admiring trees and buildings. Visitors have been coming for centuries to relax, to heal, to find a connection to polite society. Jane Austen figures prominently in Bath lore. She too wandered its streets and parks, and today one can visit the various lodgings she and her family occupied in the downward slide from a modest middle-class life style to a more impecunious, slightly shabby existence, following the death of Jane’s father.

My more vivid literary memory of Bath stems from a different source. In The Expedition of Humphrey Clinker Tobias Smollett has the main character Matthew Bramble, a goutish country squire, visit Bath for the waters—for bathing and drinking. In a visit to the bathing area, Bramble is horrified to see a scrofulous young boy being lowered into the water. He immediately entertains a vivid image of pus seeping from the boy, into the water, and infecting his own body. Quickly leaving, he also imagines that the bathing waters somehow infiltrate the wells that provide the drinking water. Smollett did not, perhaps, take to the fashion of bathing with strangers.

For some reason I’ve kept that image in mind for over 40 years.  Yet, in spite of that memory, with Nancy I did take a bath. A few years ago we went to a public bath in Budapest and needed to see what Bath might provide. The current baths are two completely modern pools, not much different from what a city park might offer. The open top-deck pool does provide a modest view of the city, with a glimpse of the Abbey tower. Bathers are not seeking a restorative cure. On an early Sunday afternoon, most were young people, in couples or groups, having an afternoon outing.

And the Bath Abby, from ground level. 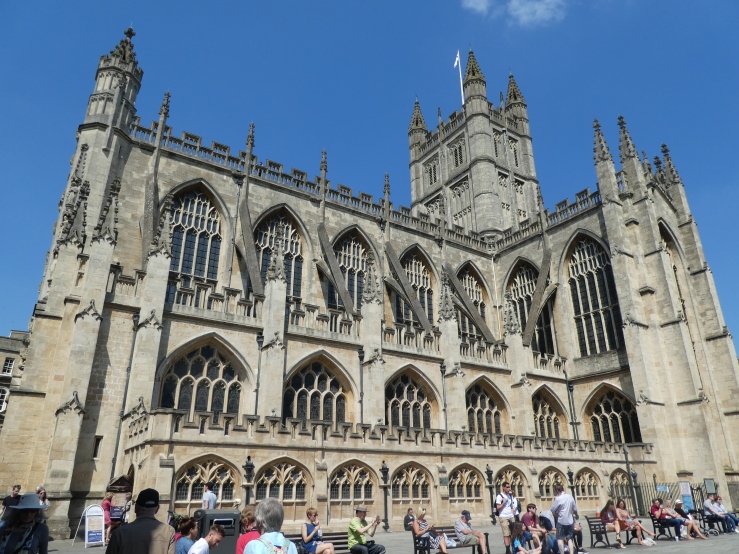